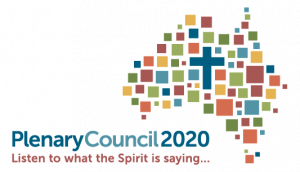 In preparation for the 2020 Plenary Council, the NCPR was invited by the Australian Catholic Bishops Conference to assist the Plenary Council Executive Committee with the collection and analysis of data.

Phase 1 of the Journey to Plenary Council 2018‐2020 ran from May 2018 to March 2019. During this phase, the NCPR helped to collect and collate the submissions from individuals and groups engaged in a national consultation process. A research task group was formed to guide the process of the research over three years. The members of the task group included two members of the Plenary Council Executive Committee, two members of the Australian Catholic Council for Pastoral Research and two experienced researchers, renowned for their expertise in this field. The NCPR was granted ethics approval for the data analysis of the Plenary Council project by the Christian Research Association Human Research Ethics Committee. 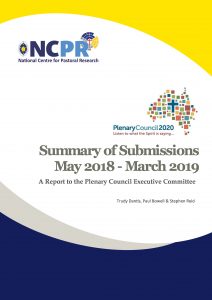 We received a total of 17,457 submissions from over 222,000 participants, all responding to the main question, “What do you think God is asking of us in Australia at this time?” The Plenary Council data underwent a range of quantitative analysis using SPSS statistical software. This analysis included a detailed demographic examination of participants’ age, religious affiliations, cultural background and location. A Summary of Submissions report was preapred and can be viewed at this link: Summary of Submissions Report – May 2018-March 2019 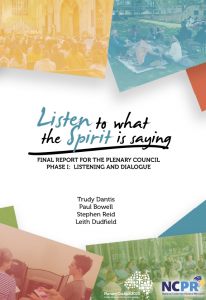 The process of analysis of the responses, which began in March 2019, was a complex one. The first step included a rigorous de-identification of all the data. All key identifiers in the form of names, contact details and other information were removed prior to the analysis. This was followed by entering the data into a qualitative analysis program called NVivo. NVivo allows researchers to read through all the responses and code them into different themes. This was a slow process as every submission had to be read thoroughly. The qualitative analysis of the submissions in Phase 1: Listening and Dialogue highlighted many emerging themes. The Final Report of this process can be viewed at this link: LISTEN TO WHAT THE SPIRIT IS SAYING: Final Report for the Plenary Council Phase I: Listening and Dialogue 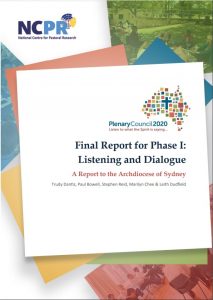 A part of the ongoing analysis of the data from Phase 1 of the Listening and Dialogue stage was the production of diocesan reports for all 28 geographical dioceses. The findings in the diocesan reports include an analysis of all submissions from each geographical diocese that were received online from May 2018 to March 2019, along with those received via email or in hard copy format, such as letters, books and submissions made through the 2018 Christmas card campaign. The analysis provided in each report was mainly quantitative in nature and explored the demographic characteristics of individuals and groups that participated from that diocese. The reports also included a list of themes that were discussed by participants in their submissions, as well as the complete submissions and stories of participants who consented to have their submission made public and released to their diocese. These were de-identified in keeping with ethical protocols. The diocesan reports were provided to each bishop, along with electronic copies of any late submissions received after March 2019. A copy of each diocesan report can be viewed at this link: https://plenarycouncil.catholic.org.au/resources/reports/

The findings from Phase 1 helped shape the next stage of the Plenary Council journey—working groups, deeper discernment, theological reflection and re-listening. Six National Themes for Discernment were developed at the beginning of this phase and the discernment process involved establishing Discernment and Writing Groups for each National Theme, while people in faith communities across Australia were called to participate locally in their own communal Listening and Discernment encounters and to send through their submissions to the Groups.

In Phase 2, the NCPR helped prepare Snapshot Reports for each of the six National Themes for Discernment. The office also continued to collect all submissions sent in to the Discernment and Writing Groups. Over the course of 2020, the NCPR also provided data, on a range of topics from Phase 1, to members of the Discernment and Writing Groups. This data was used by the Groups to inform their writing of the six Thematic Discernment Papers, which can be viewed at this link: https://plenarycouncil.catholic.org.au/continuing-the-journey-of-discernment/

June 2020: With the onset of the COVID-19 pandemic, a decision was made to postpone the 2020 assembly of the Plenary Council. In June, the six Working Group Thematic Discernment Papers were released: Pastoral Research Online – Issue 49 (June 2020)

Two of our researchers, Leith Dudfield and Paul Bowell wrote an article on the Plenary Council 2020 for Pointers, the newsletter of the Christian Research Association titled, “Plenary Council 2020–The Times They Are A-Changin’“. This article can be accessed at this link: cra.org.au/Pointers_29-2e.pdf

The findings of this project will continue to be reported to the Plenary Council Executive Committee and to the Australian Catholic Bishops Conference. They will also be available from the Plenary Council website. For  further information go to http://plenarycouncil.catholic.org.au