Our Work Matters:Catholic Church Employers and Employees in Australia 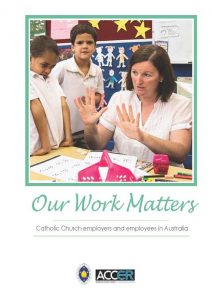 A new research study commissioned by the Australian Catholic Council for Employment Relations (ACCER) and conducted by the Pastoral Research Office (PRO) has found that about 220,000 people are employed in over 3,500 separate Catholic organisations in Australia. The report on the study, Our Work Matters: Catholic Church employers and employees in Australia, was released in November 2017.

Although Catholic Church organisations in Australia have been engaged in many different work activities for a long time, up until now little was known about the size and composition of their workforce. The PRO research team arrived at the figure of approximately 220,000 by compiling employment data from around 99.5 per cent of Australia’s Catholic agencies and organisations. More people work for the Catholic Church than in local government, and the Church’s workforce is about nine-tenths the size of the Commonwealth Government’s workforce. The Church employs about the same number of people as Wesfarmers, more than the Woolworths Group, and considerably more than Australia’s four largest banks combined.

The final report of this project can be viewed at this link: Our Work Matters